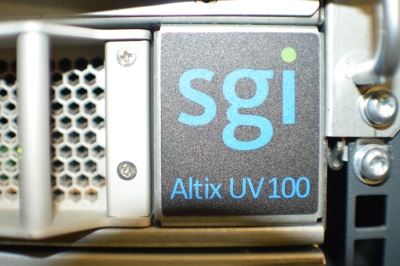 The majority of open source bioinformatics applications in use today have been written for the Linux OS on x86_64 hardware, and this is a standard platform for the majority of Linux servers and HPC clusters. A commodity server available from most major vendors will typically support a maximum of 256GB or 512GB of RAM on the motherboard, which is adequate for the majority of applications. However there are algorithms in modern bioinformatics which require a very much larger memory footprint and where a standard server (or node in a cluster) is not a practical solution.

The SGI Altix UV range of system offers a large contiguous memory footprint within a single system image (SSI), which is of particular importance for memory intensive applications such as the ‘assembly’ of genome data output from high throughput genome sequencing instruments.

TGAC has three SGI UV systems. Two UV100 systems with 768 cores and 6TB of memory, and one UV2000 system with 2560 cores, 20TB of memory and 32 Xeon Phi modules.  The UV2000 has been divided into three hardware partitions, each of which runs a separate instance of Linux, and so they can be regarded as three separate systems.